Discussions about the devices that supply a means for movement of people and goods.

Buddy and I rollin in his Bronco

Gods that thing is like my dad's suburban. Huge, nasty, and good for about anything but kids.
Up onto the overturned keel
Clamber, with a heart of steel
Cold is the ocean spray
And your death is on it's way
With maidens you've had your way
EACH MUST DIE SOME DAY

A fear of weapons is a sign of retarded sexual and emotional maturity. - Sigmund Freud

Here is my Jeep

I'm going to be purchasing the half doors in the spring. Tis my second Wrangler.
Top

My 95 Ram 1500 and My cousins 98 Cherokee
I will ask your advice... Ill even take it into careful consideration... but as we all know, in the end I will go my own stubborn way.

Sorry, being a smartass is my nature...


The Ghoul wrote: Oh, god. I can smell the Chuck Norris jokes coming.....

next is tube/buggy style doors and a tiregate.
Sic Vis Pacem Parabellum
Top

I'd like to mention that my mother is, in fact, a saint. A very caring person, she was cursed with the gift of good looks, and then came the internet.

Yrkoon9
I Talk to Spammers

We call this truck, Bumpy.

It's an old International Scout.

Cheap body lift. Gotta watch out for termites though.

(look close to see the fork lift behind the jeep, the blocks aren't actually doing anything, before anyone gets on and bitches about safety...)
I'd like to mention that my mother is, in fact, a saint. A very caring person, she was cursed with the gift of good looks, and then came the internet. SkullNBones wrote:If you can't cut out across a muddy field in your "BOV", consider it a coffin with wheels.

My Aid Bag
*Standard medical disclaimer applies to all of my posts, YMMV, Always check CNS before and after, never let the new guy drive, don't attempt anything you read here without proper supervision..... Blah Blah Blah*
Top

SkullNBones wrote:Yeah .... except in the bottom two pics I can see that the Jeep ain't moving, it's just spinning its tires.

I can assure you that I was there(I'm the driver) and while I was in the act of getting myself unstuck in the second photo the third photo is of me riding out of that mudd under my own power and without any assistance. In fact, if you look behind my Jeep in the third photo you can see my trail in the mudd.

Dude — I'm sure your Jeep is awesome. I hear that people who have them love them .... I hated the one I drove 'cause when I tried to accelerate it felt like I was dragging a dead elephant, but maybe it was just that one Jeep and they're not all like that. All I'm sayin' is, I can see not only the trail of displaced water behind the vehicle in the first photo but I can also see the wake wave being pushed in front of it. Fording a river isn't that hard. I've done it in a 1982 Toyota Tercel. Getting out of mud IS hard and that's what the Jeep appears to be doing in the second and third photo, and if I'm being honest I can't really see the trail behind it in either photo. I can see the mud splashing in front of it as it's thrown over the front tires in uninterrupted droplets, but no trail. But maybe I'm wrong. I could totally be wrong. I'm a private investigator and forensically analyzing photos (and car damage) for tort cases is something I've done a few times, but that doesn't mean I'm always right.

On topic, though, we're talking Jeeps as BOV's, right? Another thing to consider is the fact that it does have a cloth top. I mean, picture this: you have all your gear and everything packed into your Jeep and you're driving on the shoulder past all the dummies trying to get out of town in 'Vettes. Now, eventually you're going to get bogged down because wherever you drive you're either running into trees or people who abandoned their vehicles, right? I hate to refer to a movie, but remember in War of the Worlds they're driving past all those refugees in that minivan and what happens? They get attacked and overrun by desperate people who want a ride out of town. All it takes is one of the 'fugees to whip out a knife and the cloth top would be gone. So really even if the thing can drive over mud like Jesus walking on water, all I'm saying is that security might become an issue in troubled times .... unless it's stuck in the mud then nobody would try to take it

Don't mind me, man I just have Jeep issues 'cause I used to really want one and then I drove one and was just heartbroken at its performance. Jeeps are reliable .... there, I said something nice about Jeeps. 8)

Wanna make that Jeep the perfect BOV? Lift it way up, put huge mud tires on it, and get a hard shell top. Then you can go where all ever you want .... you can roll over the mob of desperate 'fugees (shame on me for saying that) .... as long as no one takes a shot at the tires .....
Saiga-12. When you absolutely, positively have to kill every motherfucking zombie that breaks through the door, accept no substitutes.
Top

i have a feeling that anyone who assaulted Grifter with a weapon while he was bugging out would fare worse than the guy in War Of the Worlds.

JoergS wrote:Realistically, I think I can launch a nine pound chain saw at 50 fps from a shoulder mounted rubber powered bazooka...

squinty wrote:I reserve the right to yell "Dookyhole!" - or it's Hebrew equivalent if such a thing exists - whilst dispensing a barrage of palm strikes at my opponent.

You just have to get to know the right Jeep. 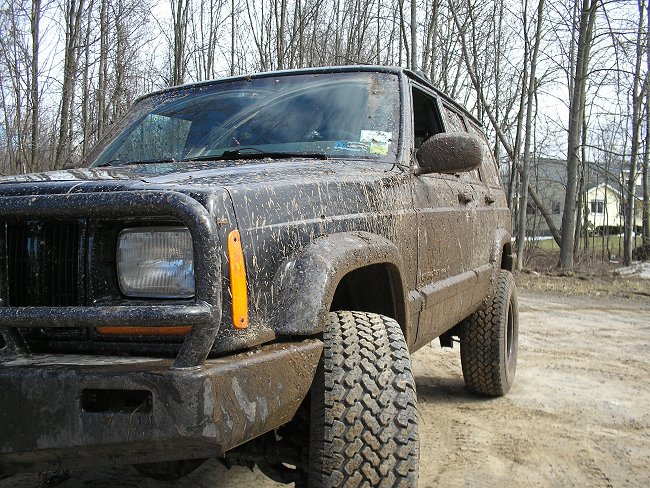 - Phil Elmore is no longer participating at this forum. He can be reached through his site,
The Martialist, and through his forum, Pax Baculum.
Top

My truck (black GMC) any my buddies old Dodge which he has since sold.

Fit some paniers and a top box,I allready keep a survival tin and first aid kit under the seat, tankbag bob and im sorted. Perfect for road use with about 50mpg to the gallon, it also performs well offroad.....weighs a ton though

I got my baja fenders back from the paint shop today and got the thing back in once piece, for the first time in 2 weeks.
Now, to only get enough tire to fill them...

I'd like to mention that my mother is, in fact, a saint. A very caring person, she was cursed with the gift of good looks, and then came the internet.

I totally agree with Miami, they're sweet cars. I would ASLO (maybe a little more) like a 96 Impala, decked out, but the newer CV interceptors may be a little more advanced.
I'd like to mention that my mother is, in fact, a saint. A very caring person, she was cursed with the gift of good looks, and then came the internet.

1998 GMC Sonoma with a 4.3L Vortec. Just picked it up a week or so ago, had some initial trouble but all is well now.

So far I really like it. Lots of torque and seems to be decent on gas.

"If ye break faith with those who died,
We shall not sleep..."
Top

Here was my sons first BOV.

Then my daughter came along and we had to upgrade.

My daughter has since decided withcraft is not the answer to a full scale zombie PAW and had decided to go with a more physical solution. Here she is waiting for one of the undead to crawl out of his grave so she can dispatch him with her trusty blade "Stank." (glows in the presence of the undead)

I'm sorry. I couldn't resist and will accept any deserved abuse heaped upon me without complaint.
The man who would be a warrior considers it his most basic intention to keep death always in mind, day and night, from the time he first picks up his chopsticks in celebrating his morning meal on New Year's Day to the evening of the last day of the year. - Daidoji Yuzan
Top
Post Reply
1764 posts