For those who live in areas where firearms are not an option and those that are smart enough to have a back up.

Just dropped this carcass splitter off with my buddy Tobin Nieto to get a rawhide sheath built. I'll do final cleanup and sharpening when I get it back.

It'll be on my table at the Blade Show. More details when it's finished.

I can't help but get this maniacal grin when I pick it up. 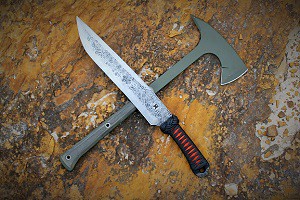 But can you baton with it??

But can you baton with it??

I see what you did there
Top

(but in a creepy note we could be long lost brothers or some-such nonsense)
~Jolly Green Survival
"It takes 3 seconds to make a stupid decision"
ZS Paid Member, no thanks to staff failures...
WFR certified


CitizenZ wrote:while they have their legs up, jam a tube up their pooper and administer fluids through that.

i like the design, certainly based on the Dadaio ,

the handle surely give enough leverage , helping a lot for the force behind the cleaving power.
"We stopped to look for monster under the bed , the day we realized that they were inside us"
Top

Wooooah! Ok we needs to take a collection among the cutlery aficionados here and get you a membership to 'coconut of the month club' that thing looks like it would make a mean piña colada. Bet you could do crainiu....I mean coconuts in a row the way most folks do soda bottles

SC Between the blade cut out sheet you posted a bit back and the last picture this thread, you really, really need to get into the T-Shirt business.
colinz wrote:
ZS - Where having livestock, land and a good attitude is more desirable than being Size <6, 'ripped', or rich.

My buddy and fellow knifemaker Tobin Nieto of Stonehaven Knifeworks made the lined rawhide sheath for it. One of the avenues that led him to making knives was an interest in movie props and replicas of movie props. He perfectly captured the vibe that I envisioned for the overall project: something that would be carried by a boss character in a zombie video game or the antagonist of a slasher movie.

I had my hand in the sheathwork, though. Namely, the "blood splatters".

The chain is a shoulder sling. It originally was part of the mechanism for opening and shutting a heavy door in a huge slaughterhouse that my landlord's father worked in. I don't know what position he had, but he told me there were 600 men working under him, and he supervised when the slaughterhouse was torn down. The hooks are forged from a high-carbon farm implement tine.

The blood splatters look pretty authentic, huh? Like something Leatherface would have hanging above his bed.

Here's one of the ways of wearing it with the sling.

One of the things I like about it is that although it is large and has plenty of power, it's still light and lively enough to wield one-handed.

I have some materials gathered for a little cutting demo video later on in the week, weather permitting.

That is freaking fantastic.

That is impressive to begin with, but the sheath really brings it all together. Totally awesome!
**Those who live by the sword get shot by those who don't**

It looks like it belongs at a Zombie Outbreak at Burning Man.

Cymro wrote:Seriously, I'm not sure I'd fuck with Ad'lan if he had his bow with him. I just don't see that ending well.

it look like the sidearm of Pyramid head
"We stopped to look for monster under the bed , the day we realized that they were inside us"
Top

Got a bit of cutting video. Unfortunately, the button didn't get pushed during the 2" x 4" chop.

But it cut over halfway through with each swing.

HAHAHAHAHA When the zombies come I am SOOOO road tripping it to your shop! You've got a great eye for bad as blades

This thing is seriously awesome.
The way is shut. It was made by those who are Dead. And the Dead keep it. Until the time comes. The way is shut.
-
Keeper of the ZS Fleet Number thread.
ZS Wiki
Top

I got a chance to put the carcass splitter to the test doing the kind of work I grew up doing and which has informed my thoughts on cutting: dismembering a mesquite tree. I think it's a lot more informative than a water bottle test or trying to cut multiple coconuts (though that may be because I failed to cut multiples due to the blade deflecting).

But see for yourself.

After I get the tomahawk I ordered....... YOU KNOW what I want next... Except bigger and more choppy! That is an amazing blade! I have a full size cleaver for taking large bones apart, but THAT is an envy! Mesquite is a very hardwood so that is very impressive!

When I saw it I thought:

"Wow, it's the cow decapitator from Apocalypse Now"

jnathan wrote:Since we lost some posts due to some database work I'll just put this here for posterity.

Return to “Other Weapons”