Discuss those "what if" or "what would you do" scenarios you've been wondering about.

There is SO much information here that I don't honestly know where to begin.
I guess I'll start here, with this dude's statement, which is totally and utterly ignorant:

rippedoff,
You words clearly proove that you dont know how powerful nukes really are.
for a start todays nukes are a lot more devastating that the ones dropped on horishima.
And for one there are enough nukes to blow the world up 10 times over.
some people will use any excuse to ignore a threat.
you should also look more into the coldwar
If nukes couldnt even destroy thee US one time over, why does everyone fear them?

First off, yield of a weapon is relative to the size of the BLAST - NOT the area effected. This is why we decided early on that the over-the-top high yield (50kT) nukes were for the Russians.
We KNEW that you can produce the same effect with less material, so why overdo it?

Radioactivity has a half life. It also comes in three different varieties:
Alpha particles - which are the most deadly, but can be shielded by a sheet of paper

Beta Particles - which are harmful, but are easily blocked by thick clothing

Gamma Particles - the least damaging, but can penetrate 16" of earth.

The radioactive halflife of fissurable materials (forgive my lack of exact terms, I did these figures a couple years back) is approximately 14 weeks.

It may be 52 years before the radioactivity expires to a completely benign level, but it won't be deadly in a maximum of 14 weeks.

I'm not going to go into any detail here since Ronin556 and ripped0ff did such a fine job. But I recommend the following books if you really want to understand the topic.

The Making of the Atomic Bomb
by Richard Rhodes (this book won the Pulitzer)
Dark Sun: The Making of the Hydrogen Bomb
by Richard Rhodes
The Effects of Nuclear Weapons
by the US Department of Defense (No kidding, it's available, but it's an older book and may be out of print. I've only ever seen one copy. I photocopied it cover to cover, more than 600 pages. Fascinating stuff.)


Towanda wrote:When I become Empress of the Universe, ticks are the first (and so far only) species slated for complete genocide.

stefan2004 wrote:the us also has a super nuke called the

"armageddon weapon", it is designed to destroy the atmospere completely- well, the blast will cause it to collapse on itself.

kyle wrote:I, for once, actually agree with gundown.

GunDown wrote: I never would have fucked her if she didn't have a vagina.

Sorry...I don't mean to be contrary but the biggest nuke ever was a 57 MT device built by the Soviets. Ronin's right, there is no point in building them above a certain size. And there is no such "armageddon weapon" that will "collapse" the atmosphere. Anyway, what does it mean to "collapse" the atmosphere? It can't fall any further...gravity is already holding it against the ground. And no bomb could possibly blow the 5.5 million billion tons of air on the Earth into space. The types of events that could blow away the atmosphere are limited to things like collisions with bodies of great size (if a moon or planet hit us), if the sun novaed (unlikely at this stage in its lifetime), or if the Earth lost its magnetic field permanently (in which case the solar wind would slowly erode it away over millions of years).
I survived ZombieCon 2007, 08, 09, 10, 11, 12, 13, 14, 15 and 16!!!


Towanda wrote:When I become Empress of the Universe, ticks are the first (and so far only) species slated for complete genocide.

The war has already begun!!!!!!!!
go to this site to see http://www.netdisaster.com/go.php?mode= ... c&start=48
Never make fun of someone until youve walked a mile in their shoes. because then your a mile away from them and you have their shoes!!!
Top

Back to the original question : What would you do? In the long term, it is entirely dependent on the scale of the nuclear strike. If it is a realatively low yield tactical nuke strike against strategic targets then you probably be relatively ok heading upwind of the fallout and out of any target areas. Lief will suck but not all civilization would fall apart. However the Russians are not known for their love of tactical nukes and seem to prefer strategic yield weapons (10MT +, I believe). Though they may still only hit strategic targets the fallout will be a greater threat. If you are unable to find a place where fallout is not an issue (which is probably unlikely depending agains on the scale of the strike), you probably not going to have large stockpiles of some neccessary supplies that you might need. Anyhow all in all its a shit proposition. Ill summarise by saying if you survive long enough to, Id head for Canada (which probably wasnt hit) and try to seek refugee status.

Civilian Scout wrote:Water is essential for physical survival, but liquor is crucial for keeping the soul alive.

the_klenzer wrote:I'd get up, look out my window, pause for a moment and say "Fucking Americans have finally invaded. Oh well, bound to happen." And go back to bed.

There is always this: From Business Insider: In the event of a killer asteroid, volcanic apocalypse, or nuclear holocaust, mushrooms could save humanity from extinction
Top 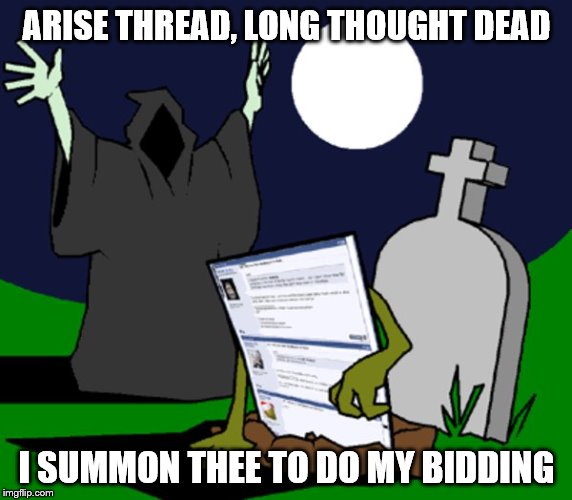 whisk.e.rebellion wrote: It's not what you say anymore. It's how you say it.

Sumdood wrote:Welcome to 2020. I would list all the rules here, but there are too many and most of them are made up as we go. Just be prepared to be punished for something.

Current Weather in My AO
Top

https://www.businessinsider.com/tactica ... map-2019-9
"All religious stuff aside, the fact is people who can't kill will always be subject to those who can." - Brad "Iceman" Colbert, Generation Kill

Wow, that article is highly political and a flat out lie. The increases in the US nuclear weapons stockpile is happening from actions taken during the last administration. These things have lead times measured in years not months.
You go 'round and around it
You go over and under
I go through
Top

Princeton University researchers use the Pentagon’s own plans to debunk the idea that nuclear war could ever be small and tactical.
By Matthew Gault
Sep 16 2019, 9:29amShareTweet

Recently leaked Pentagon plans revealed that the U.S. is prepared, not just for a wide-spread nuclear conflict, but what it called "tactical application" and "limited regional use," suggesting that nuclear weapons can be used without leading to worst-case scenario, apocalyptic devastation. Researchers at Princeton’s Science and Global Security Lab released a video based on the Pentagon’s recent plan that shows how “limited" use of nuclear weapons could still lead to the death or injury of more than 90 million people in a matter of hours.

“This four-minute audio-visual piece is based on independent assessments of current US and Russian force postures, nuclear war plans, and nuclear weapons targets,” Researchers said on a website explaining the video. “It uses extensive data sets of the nuclear weapons currently deployed, weapon yields, and possible targets for particular weapons, as well as the order of battle estimating which weapons go to which targets in which order in which phase of the war to show the evolution of the nuclear conflict from tactical to strategic to city-targeting phases.”

The video, which plays out like a game of Defcon (a video game about nuclear war) or the climactic scene from WarGames, starts with a war between the North Atlantic Treaty Organization (NATO) and Russia. During this fictional war, Russia launches a nuke at the border of Germany and Poland as a warning shot in hopes of stopping NATO’s advance. The U.S. retaliates with a nuke of its own on the Kaliningrad Oblast, a swath of Russian-controlled land between Lithuania and Poland. These initial, tactical, nuclear launches kill 2.6 million people.

Once both sides have broken the taboo against the use of nuclear weapons, Russia launches 300 nuclear warheads with the goal of wiping out NATO. NATO responds with 180 nukes of its own. It escalates from there, and in a matter of hours 90 million people are dead or injured. The researchers said 34.1 million would die immediately, with 57.4 injured. “Deaths from nuclear fallout and other long-term effects would significantly increased this estimate,” they said.

The point the video drives home is that there’s no such thing as a "limited" nuclear war. The Pentagon and Russia both talk about world ending weapons as if they can be used as part of a conventional arsenal. But the problem is that both countries have established systems and procedures that ensure, once one nuke is launched, that all the others will follow.

That was the point of Mutual Assured Destruction, the delicate balance of terror we still live with today.

Unfortunately, Cold War era thinking is back and scarier than ever. The United States pulled out of the Intermediate-Range Nuclear Forces Treaty, an agreement with Russia that limited the range of nukes. The U.S. blamed Russia for the decision, saying the Kremlin's pursuit of nuclear super weapons violated the treaty. The New Strategic Arms Reduction Treaty, which set goals for the reduction of nuclear weapons, might not survive 2020.
I am not a 'gray man'. I am a brown man, coyote brown. With FDE highlights, of course.
Top

Wow, that article is highly political and a flat out lie. The increases in the US nuclear weapons stockpile is happening from actions taken during the last administration. These things have lead times measured in years not months.

That and all weapons systems have a "best if use by" date. Nobody like stale weapons.

Increased production does not mean more nukes as the old ones must be cycled out.

As a child of the cold war the one thing that everyone hoped for was rational thought.
MAD assumed that neither party wanted to use nukes because a rational person would know that it meant massive destruction.
That was one reason neutron weapons were highly criticized they were too tempting to use. https://en.m.wikipedia.org/wiki/Neutron_bomb

In MAD scenarios then, 90 million casualties was achieved (despite lower population then) in the first 60 minutes.
Today 90 million is simple. Shanghai, Bejing, Tokyo, NYC, DC, LA, London and Moscow. A single SSBN in the pacific could handle these with a reserve.

Princeton University researchers use the Pentagon’s own plans to debunk the idea that nuclear war could ever be small and tactical.
By Matthew Gault
Sep 16 2019, 9:29amShareTweet

That was the point of Mutual Assured Destruction, the delicate balance of terror we still live with today.

Unfortunately, Cold War era thinking is back and scarier than ever. The United States pulled out of the Intermediate-Range Nuclear Forces Treaty, an agreement with Russia that limited the range of nukes. The U.S. blamed Russia for the decision, saying the Kremlin's pursuit of nuclear super weapons violated the treaty. The New Strategic Arms Reduction Treaty, which set goals for the reduction of nuclear weapons, might not survive 2020.

Return to “What Would You Do?”