I'm going to preface this thread by saying that I am relatively new to the "have cool gear, will travel" scene. My first major purchase was a 5.11 Rush 72 which is considered a three-day or assault pack. Nice piece of gear, swallows tons of stuff, and good enough for a solid backpacking/camping/whatever rig. However, it became soon apparent to me that lugging it around all the time as it was being improved with more stuff was becoming a burden. So, it was time to downsize my EDC to a manageable level.

The second consideration: I'm a dad with two little ones, both in diapers, so it's a necessity that I have stuff on hand to address their baby problems. I figured since I have to carry a diaper bag around anyways, I may as well consolidate the few items I regularly need from my 3-day pack into an EDC diaper bag. 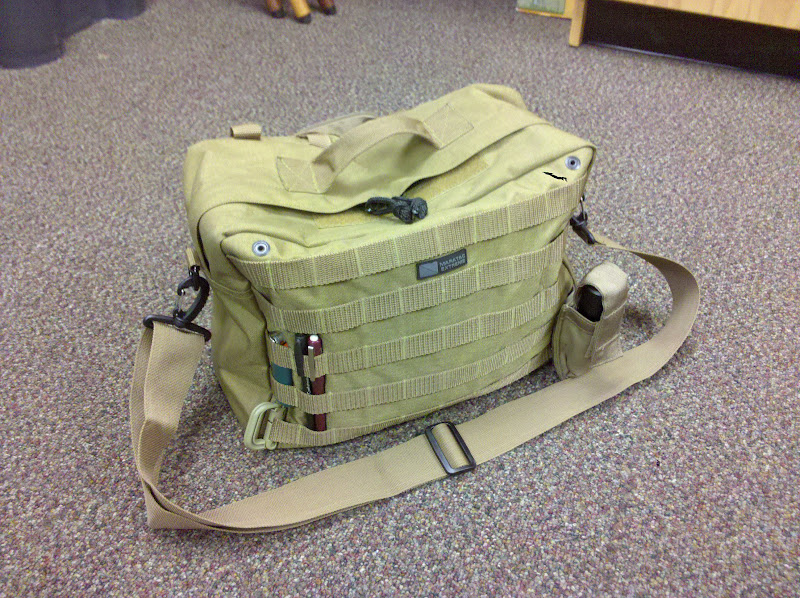 The bag itself is a Maratac Extreme XL EOD bag (County Comm). It's in Coyote, like everything else I own, but the cell phone doesn't do it right. I gave a brief review of it in another thread, but I'll recap it here:


I wrote:Good points: Large amount of space for the price (almost 1000 cubic inches). Lots of PALS webbing. Really really beefy zipper which allows for guilt-free tear-open. The strap that came with it is awesome. And, even though by all accounts it may be considered a "man-purse" when in normal use, I don't look like a complete bitch when using it (or at least, I don't think I do). Also, worth noting is, like always with County Comm, blazing fast shipping.

Bad points: PALS webbing is inconsistent in the space between stitches, sounds like no big deal but it actually kind of is when you're trying to feed things through it. It has straps on the reverse side to connect as a MOLLE attachment, though I can't honest-to-God think what you would attach it to, so it's actually nearly worthless. It has PALS webbing on the underside, but not the sides, which doesn't make any sense at all to me. Finally, and probably the most important, it is single stitched throughout; it will not enjoy a substantial amount of durability under really heavy use. However, all this comes back to one final good point... It is only $32.

It's a pretty nifty idea and a very handy bag, when you need such things. However, the design could use a large amount of improvement. I am considering walking it over to Tactical Tailor and having them perform some improvements, such as double-stitching and adding PALS webbing as well as some loop panels to the ends.

Its contents usually contain enough diapers for my kids as well as a spare change of clothes, a sippy cup and disposable wipes. However, it wouldn't be suitable for posting on ZS without a proper amount of "be prepared" gear. And, here it is (complete with blurry monster thumb approaching from the left): 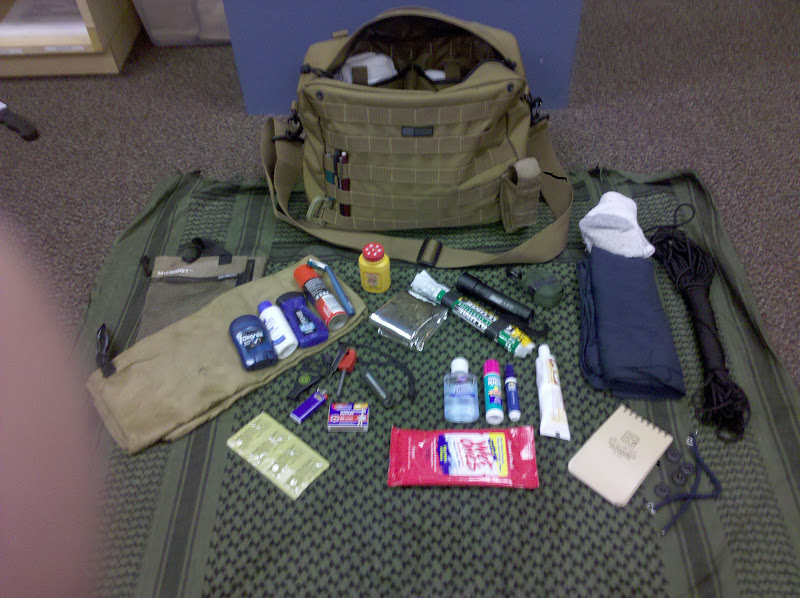 Points to note: I have a knife as part of my EDC, a Victorinox OHT. I took a badass pic of it and my other EDC pocket stuff (4 1/8" straight pry widgy, LED keychain light, kubotan) but it didn't ever feel like uploading. Secondly, the irony of having water treatment but no water container is not lost on me, and is a problem I'm working on resolving (probably by way of a 1qt USGI-style canteen - a regular Nalgene is too huge for this). Thirdly, there is a pouch mounted to the back of the bag which contains a boo-boo kit which is basically nothing but various bandages and children's Tylenol.

Maybe a folding Nalgene canteen would fit good in there. I've got one in my BOB to enhance my water carrying capabilities. I have a similar bag and have thought about using it for similar purposes.

I agree with 1200RT-P, it needs some sort of canteen.
I'd also add a basic first-aid kit, and possible a poncho to supplement the space blanket.
Maybe also a snack or power bag or whatever too.
Does your BOB at least have: water, basic tools, fire, food, first-aid kit, and shelter?
"When planning, prepare for the most likely, and then the most catastrophic."
raptor wrote: Being a gun collector does not make you a prepper.
the_alias wrote: Murph has all the diplomacy of a North Korean warhead, but -he has- a valid point
Top

awesome nice to see others making bags for the babies... i got littles aswell and thats an awesome set up, i have bags set up just specificaly for my babies, seperate from my own bags... diapers, wipes, clothing, binks, formula, meds/creams and ointments, silent toys, recieving blankets.
"Time to nut up, or shut up" - tallahassee

Shemagh use #445: Emergency shirt when children throw up on themselves! 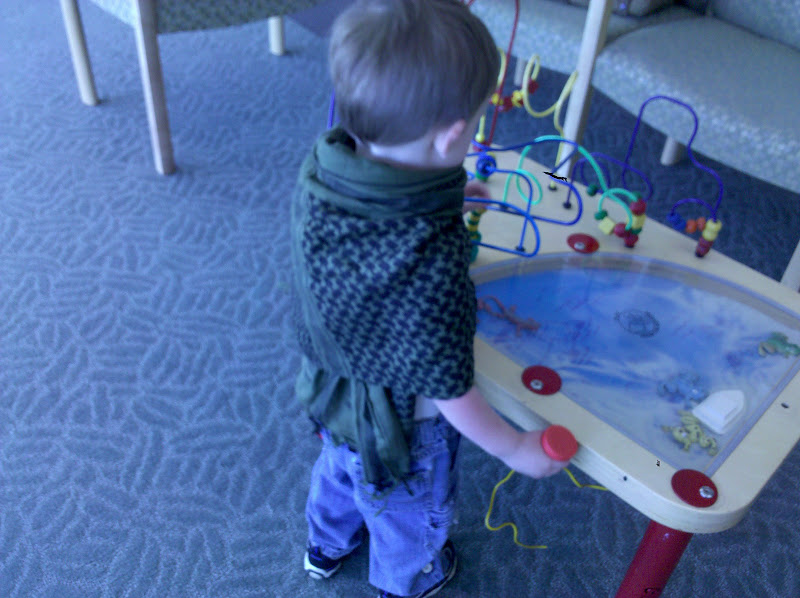 Most epic use for a Shemagh ever

Defeater wrote:Shemagh use #445: Emergency shirt when children throw up on themselves!

It can also cover nether-regions when things come out the other end... with gusto. Been there... without Shemagh!
Top

+1 Awesome!
No greater expression of liberty than the report of a RIFLE!

Just trying to keep this life from becoming "Nasty, Brutish, and Short".