Anybody have a source for how to utilize a right angle flashlight with a handgun ( preferably with pictures ). How does the military teach it?
Not all those who wander are lost

I do not recall the military ever teaching it. Up until 2002 lights on weapons were practically forbidden. The focus was on the NVGs. By 2004 the military was ass deep in an urban campaigns where NVGS were mostly useless and everyone that could, started strapping weapon lights on to their rifle. The pistol was still seldom used but laser optics that had been widely derided to that point started appearing on pistols (and rifles). At the same time the old D-Cell angle head flashlight started disappearing. It was gone by 2005.
You go 'round and around it
You go over and under
I go through
Top

Yea don't mean mounted lights. Here's my thought process. I have several headlamps that are right angle beam. I've played around using one as a light while shooting a pistol in the dark. But never really found a grip of the flashlight/pistol that A.not interfere with the operation or grip of the firearm B Afford a good stabilizing effect on the gun hand while illuminating the target. I figured since the military has used those big clunky right angle flashlights for since forever theywould have incorporated it into their handgun training.
Not all those who wander are lost

I know what you meant. I was the one that was unclear.

Weapons and lights did not go together in the military until they started mounting them on the weapon.

I imagine there was a bit of police use and training out there. Nearly all police do not use angle head flashlights however. Mostly because you are supposed to use a straight flashlight when shooting a pistol.
You go 'round and around it
You go over and under
I go through
Top

"Here's a pic of how the GI anglehead can be used to fire the pistol at night...arrow points to side switch the pointer finger is depressing." 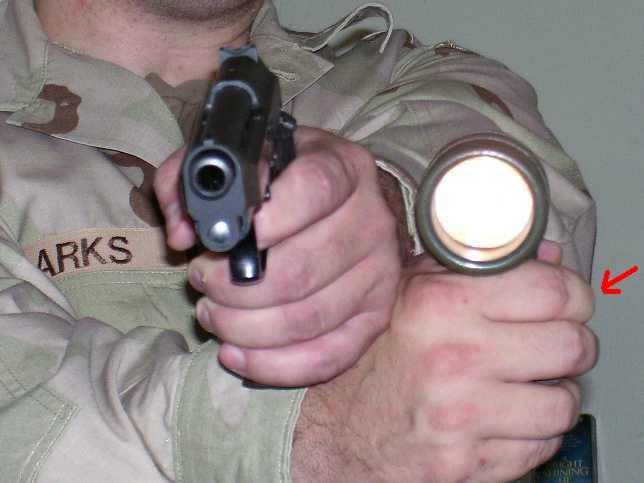 whisk.e.rebellion wrote: It's not what you say anymore. It's how you say it.

Sumdood wrote:Welcome to 2020. I would list all the rules here, but there are too many and most of them are made up as we go. Just be prepared to be punished for something.