I have a S&W Military & Police that I love and refuse to part with. My problem is that Mrs. Ansgar has wee little hands that can't reach the trigger in DA, so she has to manually cock the hammer before every shot. She does not like shooting, but understands that she may someday have to defend herself at home when I am not in the house, but we believe that we should prepare for the worst and hope for the best. That said, she only goes to the range enough to keep familiarized and able to hit center mass at 10 yards (8.6 yards is the longest straight line distance in our house). I really don't like the idea of her being forced to go SA in a defense situation, so my question to those of us who know more about sidearms than myself (i.e. almost everyone here) is given her hand dimensions, what pistols available in 9mm would be small enough for her to work the trigger in DA/DAO, but not be a mousegun. We have no issue with weight (she hefts my S&W with no problem, just reaching the trigger). I'm hoping to build a list of guns to take her to look at/grope and hopefully rent before buying.

My thanks in advance,
Ansgar
Top

I think the Shield and XDs would be that size. Maybe one of the striker-fired (Glock, M&P, XDm) poly guns with the smallest backstrap on.
Opinions subject to change in light of new information.

We just worked my wife through a similar issue. My recommendation is going to be for one of the striker-fired M&Ps, either the full size, compact, or Shield. The reason I can't be an more specific than that is that all three of those not only have different sized grips, they have different grip *geometries*. I would have assumed that the Shield would work for the smallest hands, the full-sized for the biggest, etc. Turns out, that's not always true because the exact shape of the hand seems to be AT LEAST as big of a factor as the overall hand size, if not more so. The one thing that the M&P striker fired line does that seems to be better for smaller shooters than the Glock line is in the thickness of the grip just below the slide. The M&Ps are either thinner through there or at least more rounded, which seems to be an asset for allowing smaller-handed shooters to get the back of the grip into the "pocket" between the thumb and fingers as compared to a more squared-off grip on the Glocks.
Top

*EDIT* sorry i didn't notice the caliber restriction to 9mm


well i know a little .22 that a lady could like, it inexpensive , good looking and really simple to use, and disassemble

if norinco are available then the gun will only be 150$ otherwise the original model cannot be a bad choice. it just a little bit too small for my hand, but it still comfortable

there is some 1911 variant that could be good, usually 1911 are quite thin since they are single stack

but it depend if she can manage the 45acp recoil. 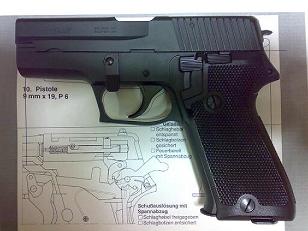 do you think a glock 23 with rubber grip could be good too ?

if you think that my recommendation aren't good, i'm sorry. i have gorilla hand and i like big handle. so i aren't that good for recommendation but i wanted to try to help you
"We stopped to look for monster under the bed , the day we realized that they were inside us"
Top

Your wife's hands are bigger than mine. That is one of the main reason I carry a Walther P22 mostly. It's comfortable for me and I am accurate and consistent with it. I did upgrade to a gen 2.5 Glock 27. If I had my druthers I would have held out for a gen 4. It fits my hand "ok" and a lot better than the other 40 cal compact / subcompacts. The gen 4 has exchangeable backstraps and makes it a little better for the small handed grip. The best thing to do is make a date out of gun shopping. I would suggest a gun show. But with the latest boom, I doubt a gun show would give you enough room for a hands on feel for anything

EDIT before post, also the kel tecs are nice for the small hands DA trigger pull is a bitch to get used to
I hear what you're saying - I just don't respect you enough to give a fuck about your opinion

Steph and I have this same issue. I have a Sig Sauer P226 9mm that I love, and she likes it well enough but the grip is a bit big for her. We visited Trebor to do some pistol work, and he's got a P239, which is basically the single-stack version of the P226. Fits her like a glove. That's going to be her first pistol, soon as she gets around to filling out her damned Chicago paperwork. So, you might see if your wife can rent/borrow one and try it out.

Thanks for the great responses so far.

I gathered a bit of additional data in the name of science (and considerations). Her main problem with my Smith is the distance from the web of the thumb to the trigger while holding it. In SA, she can reach it just fine at a distance of 2 3/8", but in DA, she has to strain to reach it at a distance of 2 7/8". The grip is 1 3/8" at its widest. I've been looking at the dimensions of Glocks (I had to sell my Gen3 23 several years ago to help pay for a move), and while the 19 and 26 look to fit her sizing needs from the Glock website, there's no data for web of thumb to finger position on trigger distance. Perhaps someone with a 19 and/or a 26 would be kind enough to measure that and post it for some brownie points?

3 3/8 " from the back middle of the backstrap to the middle of trigger.

I don't have a model 26. I hope to remedy that as soon as my LGS gets a blue label in stock.
There is no and never will be a shortage of stupid.
There ain't no fixing stupid
Top

Try a Sig P6 if you can find it. Great gun. Fits well in smaller hands
"If you give up your fangs, boy, all you'll ever be is a Sheep." - AnonEmouse
Top

My Gen 2.5 27 Is 1 3/8 wide and 2 3/4 from web to trigger.
It takes a long for me to get the feel of it because it is right at the tip of my trigger finger. I can shoot it, but like I said I'm a lot more comfortable with my p22. If it was a single stack it might have been better or a smaller caliber, but it's not what I wanted.
I hear what you're saying - I just don't respect you enough to give a fuck about your opinion

I have found most, most but not all, European hand guns tend to be a bit smaller in the hand area.

But that could possibly be because most are in smaller calibers. But even most of the 9's seem smaller to me.
Top

There are short triggers available for most Sig pistols. I have one on my P226 and mean to get one for my P6 one of these days. The Browning Hi-Power (and clones such as the FEG PJK) do well for small handed shooters. Any of the offerings by Kahr Arms may fit the bill as well. The Walther P99 is just plain sexy and has multiple backstraps, mag may be an issue though.
" So, brave knights,
if you do doubt your courage or your strength, come no further,
for death awaits you all with nasty, big, pointy teeth."
Top

I'd recommend looking at the Kahr CW9 or the Beretta Nano. The Nano is a bit of a mousegun in size, but it is a 9mm (there's a .380 version too, IIRC, but why?). The Glock 19/26 and CZ 75 Compact are worth a look, too. Actually, I think the trigger on the Compact and standard CZ 75 is the same length, so maybe have a look at the full-size CZ, too. The slide release on the CZ is a bit long, but you can get around that easy enough.

The glock trigger and SA triggers are closer to the grip. However like others have said I think going with a single stack is the way to go. The shield is thinner than the M&P with a smoother lighter trigger. I also check out the Kahr CW9.
Top

Smaller grip than the Glocks, DA/SA with decocker. It's my usual carry weapon, and I have hobbit sized hands.
The Devil's always smiling when I pass by.
Top

Sorry it's been a while since I last updated, but we made a day of going to the LGSs (5 of them) so she could fondle guns while I looked for a holster to fit my revolver (got lucky on some noname adjustable - $17). After being handed mousegun after mousegun in a succession of increased annoyance to her, she would simply start pointing at guns on the displays that she wanted to look at (she actually said "I feel like I'm gonna break this damn thing" when she got handed some plastic .380 [she's a huge Will Smith fan]). So what did she find that fit her hand like a glove and she liked the feel? A G26? A Nano? A P226? Our next gun has been chosen like Cinderella identified by her glass slipper, the Beretta M9. She said that it "felt like the revolver, but without the not being able to reach the trigger part."
I have now learned from talking to her that she likes the feel of heavier guns especially with the reduced recoil from the additional mass (She's fired a PF9, my S&W Military & Police, a Colt Python, a G23 and a PT1911, so she does have a decent understanding of how recoil works).

On a further note: I did not choose any of the guns for her to look at, I only wrote down which ones she held in what order at which store, waited til we got home and asked which she liked best.
Her, without skipping a beat: "The third one at Ultimate Defense."
Me: "What did you like about it?"
Her: "It felt like the revolver, but without the not being able to reach the trigger part. Heavy enough to feel solid, but not a brick and my finger rests naturally above the trigger." (Her finger when straight forward just reached the vertical leg of the trigger guard, but she always goes outside the guard and high, just as she was taught)
I look at the sheet: M9


*Ninja Edit: We're trying to find a day to go to the range and rent one to make sure she likes it while I begin saving up money to get one when things calm down*
Top

another i LOOOOOOOOOOOOOOOOOVED was the Beretta 96, it like the M9 but in 40 S&W , smooth like a 9mm but the bullet hit like a 45 , seriously loved that gun , a great power without a big kick

That's really odd. The Beretta has a fat honkin' grip, and the small-handed ladies that have shot mine weren't able to reach everything correctly.
But if she likes it, then you're all set.
It's a shame we don't live closer; I would've arranged a play- date.